It’s been 20 years since Outkast first emerged on the scene, yet closer to 8 years since the Atlanta duo was last spotted together. Yet now, as a kick off to their 20 year reunion tour, Big Boi and Andre 3000 took to the Coachella Music & Arts Festival stage to perform for the stellar crowd.

I had the pleasure of watching Outkast at the Blockbuster Pavllion (in San Bernadino) circa 2001, smack dab in the middle of their prime. So in anticipating their Coachella reunion, I was more than apprehensive. My soul couldn’t handle possibly ruining my last fleeting memory of them with an asynchronous performance. And courtesy of the failing audio system and lackluster crowd, my biggest fears were accomplished. Andre 3000 took to a performance stage for the first time in nearly 7 years and was met to a series of challenges that left not only those watching frustrated, but left him thoroughly displeased. By the time he got around to performing “Hey Ya”, you could see the struggle in his face. Sheer disappointment.

Yet I can’t blame them for a moment of it. All the right components were there. They were even forced to end their set earlier than scheduled because the stage managers kicked them off stage. Super lame. — Anyway, check out Outkast full set at Coachella below. Guest appearances by the Dungeon Family: Janelle Monae, Sleepy Brown and Future. 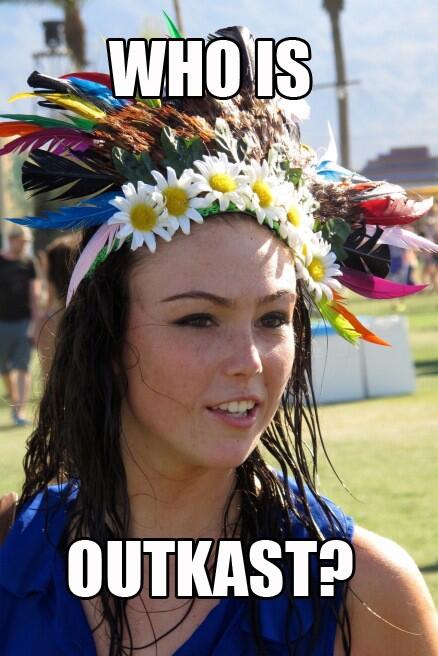